Beau: On the road to recovery

Beau arrived at the German Shepherd Rescue Elite Essex Kennels where she was due to be put to sleep if they hadn’t stepped in to help her. At that point she was tremendously stressed and was completely scared of her own shadow and the slightest of noises. Beau was never really any good with men and she would bark, growl and lunge, but this was all out of fear. The staff and volunteers worked hard to get Beau less stressed but they could see that this would take time, teaching and patience.

Beau was then taken to the Bristol Kennels as they have a little more time and experience in dealing with cases like Beau, and Sarah who is a dog trainer and behaviorist could work with her. Since she has been there, Beau has fallen in love with Ellie, one of the staff at the kennels and they share a very special bond. 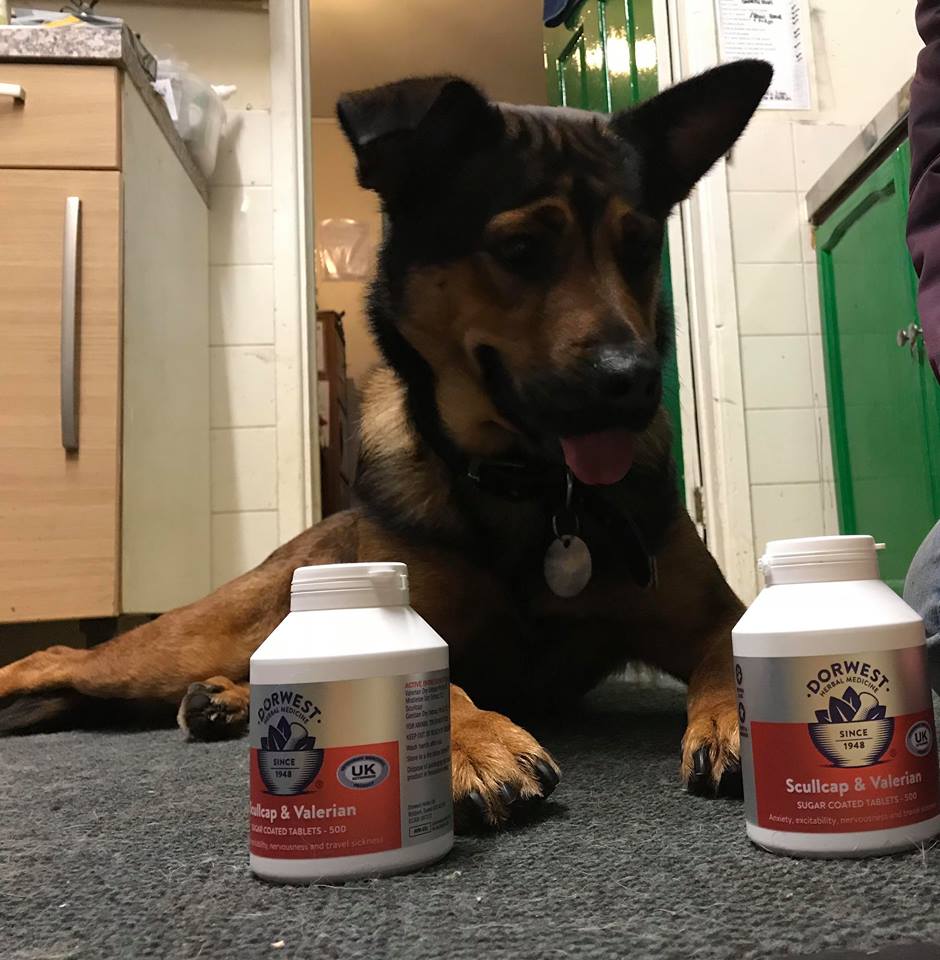 Hearing of Beau’s story we wanted to help make a difference as we could see that her fear and anxiousness was the barrier to her being a happy dog again and even re-homed. On 2nd January we sent Beau some Scullcap & Valerian Tablets to help reduce her anxiety and huge fear of noises.

On 24th January we got an update on her progress. “Just a little update on Beau, she is really starting to relax, still slow progress but working on small things and taking our time is really working!”

The Kennel’s approach was to first start addressing Beau’s fear of noises and sprays. “We have managed to desensitise Beau to a muzzle for those times where there are no options, and we are nearly there with being able to give her a bath or shower. But, now she doesn’t flinch at sprays and noises!” Already after just one month, Beau had grown in confidence and was much more accepting of staff and her surroundings.

Previously Beau would have a meltdown when a bottle was used near her, even more so a spray or aerosol.  But as you can see here, she is now accepting it no problem and is also trusting the staff around her more.

“The car is a big fear trigger and unfortunately it’s also the most important thing we need to get her used to. Because if someone does show interest in her, we need her to get into a vehicle and not become too stressed”.

We suggested using our Valerian Compound along side the Scullcap & Valerian Tablets for added effect which is fast acting and lasts a couple hours- perfect amount of time for a ride in the car. We recommended giving a top up of the liquid Valerian Compound about 30 mins before the car desensitization work starts, to be given straight on the tongue, in the food or on her bedding. We sent these over to Beau on the 9th February with our fingers crossed!

On 7th March we heard some great news!

“Great news! Beau decided that this was the day she jumped into a car on her own”

By the end of March we had received these videos of Beau looking relaxed, enjoying playtime with the staff and even riding in the car! It took three months to get Beau relaxed in the car enough for her to have a ride around. The work that the German Shepherd Rescue Elite have done has achieved so much!

“Can I just say on behalf of Beau, thank you so much for your contribution.  Both the kennels any myself agree that it has taken the edge off of her anxiety which has allowed us to start the counter conditioning and desensitization rehab work that she so desperately needs. The Scullcap & Valerian Tablets I believe, have been a vital element to achieving this so thank you Dorwest yet again”

Beau still has a long way to go but the transformation over the past three months has been miraculous. We are so pleased that we can help dogs like Beau who have so much to give but their fear and anxiety holds them back to reach their full potential, and be in a forever home. We’d like to thank all of the staff and volunteers at the German Shepherd Rescue Elite kennels for all their hard work and for supporting dogs like Beau and giving them a second chance. Beau is still looking for a special home to call her own, where she will be given the time and understanding to settle and show her love.

2 thoughts on "Beau: On the road to recovery"