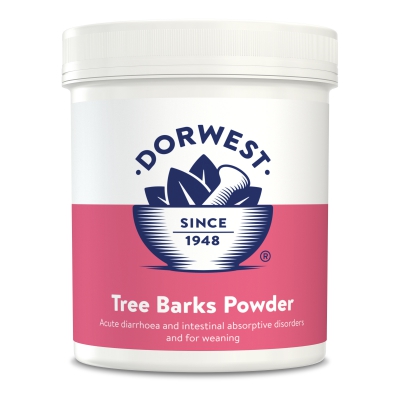 Upset tummies, poor digestion and diarrhoea are all common complaints that can be non-specific and may recur, which can be unpleasant for you and your pet. Our Tree Barks Powder can help though, by naturally soothing the digestive tract. The two powdered tree barks in this supplement help to slow the passage of food, increasing the absorption of nutrients, firming the stools and easing discomfort. From pups to veterans, our Tree Barks Powder is suitable for all dog when their tummies need some extra support.

What are the ingredients?

Our Tree Barks Powder consists of just two ingredients. 90% finely powdered slippery elm bark and 10% white poplar bark. We use absolutely no fillers and the quality of these two ingredients meet the European Herbal Pharmacopoeia standards. We source both ingredients from their native home in North America.

How does Tree Barks Powder work?

This fine fluffy powder does something magic when it mixes with water, becoming almost blancmange like, hence the name ‘slippery’ elm. It coats and soothes the stomach and digestive tract (emollient action), helping to support the absorption of nutrients, firming stools and easing discomfort.

Which dogs can benefit from Tree Barks Powder?

Easily digestible, the gentle action of Tree Barks Powder means it is suitable for use in puppies to aid weaning, during recovery from illness and alongside medication in animals with conditions such as exocrine pancreatic insufficiency. It can help your pet, whether their digestive issue is a one off (often due to something they shouldn’t have eaten!) or if they struggle intermittently or longer-term with non-specific digestive issues. Keep a tub in the house to have ready to use when it is necessary or give regularly to keep everything under control.

For more information, including administration, use in pregnancy and lactation and any interactions please go to the information tab.

Administration: 1 tsp per 10 kgs bodyweight daily added to the daily feed or mixed with liquid. Can be increased if required for severe cases.

Can be used during pregnancy?: Yes

Can be used during lactation?: Yes

Interactions: Can be given in conjunction with medications

Special Warnings: Due to the wide range of intestinal disorders, some of which may be serious, it is recommended that veterinary advice be sought before using this product or if the condition fails to improve