Crufts is within touching distance! By far our favourite time of the year and this year we are building up to the greatest dog show on earth by finding out a little more about some of the most successful people to have taken to the big green carpet. Here we find out more about the owners of that little hairy Basset, Ch Soletrader Peek A Boo ‘Jilly’ who went Best In Show back in 2013, Gavin and Sara Robertson. 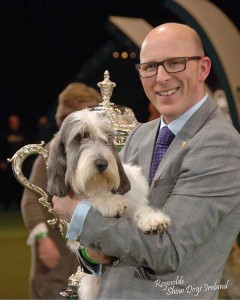 What do you most look forward to at Crufts?

It’s a show to love and hate, but it’s like no other anywhere in the world.  The volume of people and the difficulty parking, alongside the stress of a dog show make Crufts something of a nightmare, but this is outweighed by the thrill you get feeling the buzz of the place, which we love! Being awarded Best of Breed brings a mixture of jubilation and emotion, and makes the hours and weeks of stress evaporate, adding to the immense feeling of pride as a breeder winning at the biggest show in the WORLD.  The adrenaline is in overdrive…!

It’s been a few years now since you won Best in Show with Jilly at Crufts, what have you been up to since?

We set up a charity called the PEEK A BOO TRUST, aimed for dog show people to help raise money for dog and children’s charities. We have organised charity walks and events involving hundreds of fellow show enthusiasts, raising close to £150,000 in just three years. I love doing this, to help promote positive canine news/activities.

And with the dogs, Jilly has had puppies and one of them Magic Mike, a son, is being shown by Sara. He is only 18 months old, but he is one of the best we have ever had. People who know me know I never make bold statements like that very often. He gives me goosebumps watching him ringside and I can only say that about one other dog we’ve ever had in 60 champions, his mum! The future is exciting…even writing this now makes me excited about what Mike could achieve…time will tell…and I’m a huge believer in fate… 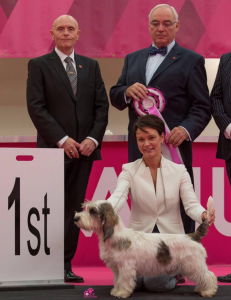 You are renowned worldwide for breeding top quality PBGVs, how did you get started?

Beagles were my original breed, I went with my parents at ten years old to look for another breed. I originally liked the Italian Spinone, then the following day a PBGV, which back then was very rare (1983). I became hooked on the Petit and have been obsessed since, putting my life’s work trying to breed the best healthy, happy, correct Petit ever.

What top tips would you give to someone who wants to breed good, healthy, correct dogs?

Watch, listen and never be scared to ask breeders who have been successful. They’re doing something right to be at the top of the game, so their knowledge is valuable. Doing your homework on pedigrees and health is key. I always research both the dog and the bitch from every angle before I breed to ensure it is the right thing to do.

Then for sure, treat dogs like athletes, feed them the best, condition them the best but also; above anything else, just let them be dogs. All dogs, no matter what they are bred for need downtime like us. I hate to see people making them stand for hours on tables at shows and constant training. At Sara’s and my place, the dogs are always playing with each other and our two young children join in too. I like to think all our dogs are happy and it comes out when they’re at a show, they just love it.

If you could recommend one Dorwest product what would it be and why?

We use quite a few Dorwest products and the team there are always available to help if we need help. But as a breeder I always think its essential to have Raspberry Leaf Tablets at home. Breeding isn’t as easy as just putting on dog to another, there is a huge amount of work that needs to go in to it and Raspberry Leaf is one of those products that definitely helps us.

What is your favourite Crufts memory?

For sure it’s going Best in Show in 2013. There isn’t a week that goes by without a memory or someone mentioning it. It was and is the most amazing feeling in that main ring with the crowds and atmosphere, it’s the canine equivalent to winning the FA cup or Wimbledon.

Dorwest Herbs will be attending their 45th Crufts and we will be in our usual spot in Hall 4, stand 72. Pop by and meet the team and kepe your eyes peeled for our special guest spending time on the stand over the weekend!