THE WONDERFUL STORY OF BILLY

We received the story of Billy from Helen Freeman who runs Border Terrier Welfare and Rescue in our area, and it’s such a lovely story we thought we should share it with you all.

Billy was re-homed by Border Terrier Welfare when he was 6½ but sadly the owner died and neither the wife or any  of the family wished or wanted to keep this poor dog . On examining his  veterinary notes, he had been diagnosed as needing two teeth to be removed surgically  back in May 2012, but sadly this had not been done  …..  but things got worse for this poor boy.  The family put him into a national all animal charity centre but unfortunately the vet there failed to find the severe problems with his teeth and so the problem went untreated for the month he was there.  Fortunately he then came into Border Terrier Welfare and is currently in one of their supporter’s kennels in Somerset.  Here he has space, lots of interesting and lovely things to look at which he is enjoying along with some much needed TLC.  He has been to Kingfisher Vets in Crewkerne where he was checked over and five teeth had to be removed.  One was badly infected with an abscess which it is hoped will now heal properly and he will be in less pain.  His ears were checked and his other teeth scaled and polished – just look at how good they look now!

He’s now being fed on Lily’s Kitchen grain free dry food and is having Dorwest’s Garlic & Fenugreek Tablets and Green Releaf® to help improve his general health and give a boost to his immune system before being re-homed.  A new permanent home has been found for Billy in Cornwall and it is hoped that he will be moving there in a week or so, when he has recovered from his problems, had his coat stripped to make him spick and span and of course had the all clear from the vet.

We are delighted that this lovely dog will now have a permanent loving home and our admiration goes to Helen and all the helpers and supporters at Border Terrier Rescue who do such a great job in taking care of these super dogs and finding them homes.  There are so many breed rescue charities and they all deserve our support and respect for their untiring work looking after these abandoned dogs. So a great result all round – especially for poor Billy ! 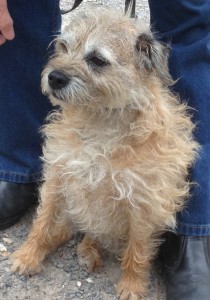