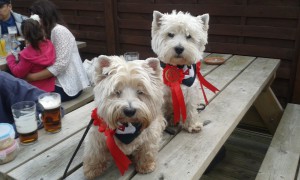 Tottie will be 13 in July and until March 2014 never had skin problems. She began scratching mainly on her side and started to make it sore, she developed a bald patch too. Our Vet gave her a steroid and antibiotic injection and said it could be pollen allergy. We feed her on hypoallergenic food and were careful with treats we fed her. The injections worked but I was not happy giving her steroids so she was put on antihistamines. We then started to notice that her coat was getting very greasy and she needed a bath every two weeks. I think we tried all the soothing hypoallergenic shampoos we could find. Tottie also used to get very hot indoors and was always panting, this continued all year and it was distressing for her to be itching all the time and could not settle. It also woke us in the night.

Our Vet tried a new drug which is apparently hard to get hold of and is expensive.  We of course tried it and it did help but not completely, and she was still panting and had a greasy coat. I was getting worried that it may be her age and she would not improve so we got the Vet to check her heart with the panting.

In January we took her away on holiday in a log cabin on the North Yorkshire Moors. It had underfloor heating but outside it snowed every day. The poor little mite scratched and panted for a full week and her skin was red hot and a bald patch developed on her side. I then rang Dorwest Herbs and spoke to Gemma. She was brilliant, easy to speak to, understanding and knowledgeable. She advised what we could try and of course we would do anything by this time. It was coming up to Crufts time so we said we would go to the stand to speak to her again and get what we needed, as we are a bit old fashioned and like the personal face to face meeting.  We bought Garlic and Fenugreek Tablets, Green Releaf® Tablets and Easy Green Powder. Gemma explained how each worked and she also mentioned the greasy coat and Tottie getting overheated, it was like she had met her and examined her. We also bought some Oatmeal Advance Shampoo. When we got home we started her on these straight away, potted meat or spread does the trick to hide the tablets in and she had them twice a day for the first month. During this time I tried reducing her veterinary medication, she was taking it alternate days then once again a week. After 10 days the scratching almost stopped almost, her fur grew back and her skin was less red and hot. The only time we noticed was when she went to the groomers as this did irritate her skin.

Now we are two months in and she is amazing, I honestly cannot believe the difference.  She only scratches at odd times naturally.  Her coat is no longer greasy and the groomer commented on this also. She has stopped panting and is not overheating and as for her medication from the Vet well that is untouched in the cupboard! I never really believed in reviews before thought they were all a bit made up, however I would strongly urge anyone with a dog that has skin problems to try these. Tottie is now a happy little dog again.

The big test was a week ago when she went to the groomers again. When I got her home I kept a close eye on her but she was fine no irritation at all. That is the first time in a year. We have noticed a difference in her demeanour too, she is a lot happier and chases her young brother round the house. Tottie also won first place at a fun dog show for best Veteran last week and that was when she had not even been bathed or spruced up!! I cannot praise the service we have received from Dorwest highly enough.