Skin – Find out how George the Bulldog ditched the itch!

This is George, he’s a Bulldog and he’s my mate! 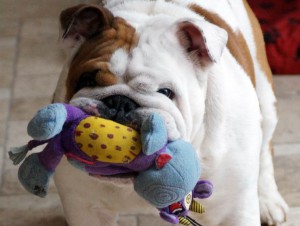 As many Bulldog owners will tell you they are a special breed, they need lots of care and cost you lots of money and it’s like having another baby. We were fully aware of what sort of problems we would have with George when we purchased him and sure enough as soon as he hit adulthood hit George’s skin problem surfaced, it started with a red rash down his spine and hair loss. Straight away his food was changed and a special shampoo was purchased but to no good, it started to get worse. The first of many trips to the vets began and we were told he had a skin infection or mange!! They tested and prescribed antibiotics, George’s skin began to clear up but the hair loss was still a problem and then the hot spots began. They were small and circular, dry but wet in the centre on his head, side and back. His hair began to feel really greasy and dull, another trip to the vets and more tablets, he improved for a while but a couple of months later back to square one with more hair loss and more sores. We tried different food, more shampoo, different vets and the same conclusion was reached each time ‘it’s a Bulldog I’m afraid that’s what they are like’. After a couple of years of this god knows how many diet changes and a cupboard full of creams, shampoo and eardrops etc. the problems continued, we felt beaten, we were in this spiral of trying to find out what his skin problems were and how to treat but no vet would give us a proper answer, they just gave us pills for George which were short time benefit only. Then one day my mum gave us a Dorwest leaflet from the vet, I have to admit we were sceptical after trying so much already but what did we have to lose so I gave them a call told them all about George’s skin problems and they advised me to try Garlic and Fenugreek Tablets and Green Releaf® Tablets, so we did. After a while on these an improvement was noticed the skin would go into periods of health then drop back again, we noticed that when we had Sunday dinner and George had some veg and potatoes etc. his skin improved so I looked on the Dorwest website and decided to try the Easy-Green Powder mixed in with his food, coupled with regular baths with Hibiscrub, success, we seemed to have light at the end of the tunnel, no more hot spots, no more hair loss etc. It’s been a battle but without Dorwest we would still be in the tunnel with no end in sight!!