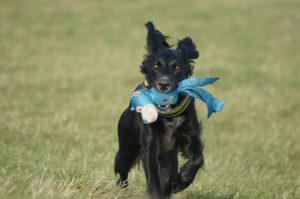 “Sonny is now a 4 year old lurcher,  but his itchy paws started when he was about a year old. His toes are kind of webbed with hair growing between and he just started to lick and nibble them until red raw and hairless on top. The once white hair now stained brown.

We took him to see our vet who suggested it was an allergy to something (most likely from his springer spaniel gene!) and referred us to a dermatologist for diagnosis.  Iin the short term using antihistamines and a newer drug called apoquel to prevent the itch/lick cycle we were trapped in. After various diets and tests it was concluded sonny was allergic to a list of 11 environmental allergens including grasses/ plants, wool, house dust mites and ironically cats!

Without easily being able to remove most of these from his life and not wanting to constantly be on tablets, we opted for immunotherapy- a monthly injection to combat the worst of his allergies with the apoquel as a back up if he had a flare up.

For the next 2 or so years this all went fairly well on the whole with flare ups perhaps 4-6 times a year.

Unfortunately during this time, Sonnys behaviour also changed. He had some negative experiences out of our control and began reacting to other dogs and some people.

We enlisted the support of a couple of behaviourists to help but despite best efforts, there was no real improvement. Then in February 2016 we met with a fantastic behaviourist who put us on such a positive road to success which among other thing included 2 key changes to Sonnys life.  Firstly to change to a raw diet, and secondly to include some Dorwest supplements each day.

The diet came first and the changes to his general behaviour were easy to see- along with his lovely coat, clean teeth and good poo (sorry!!).

Then we got in touch with Dorwest for advice on what products would suit best, and were recommended Garlic & Fenugreek Tablets and Green Releaf® Tablets to be given daily.

Pleasingly I can mix these in with his food each day and he happily eats them out of the bowl. Unlike the other medication which needed to be precisely delivered to the back of his throat for it to stand a chance of staying in there- no option of hiding those in a bowl of tripe!

We’re about 6 months in to our winning combination of injections, diet and herbal medicine and Sonny’s feet are back to white. He is itch free and so much happier for it.

Our work with the behaviourist continues but Sonny has come on in leaps and bounds in these short months. I do believe part of this progress is because of his previous stress levels- being itchy and irritated meant he just wasn’t in a good place to be interacting and learning.

In honesty before trying the Dorwest tablets I was a sceptic- I never thought something herbal would be able to compete with a prescribed drug but seeing the difference with my own eyes has convinced me I was wrong!!” 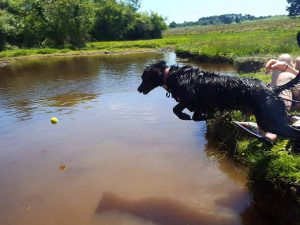