All about the Peek A Boo Trust

In just one week it is the 4th annual Pawscars awards, a glittering event held on the Wednesday night before Crufts to celebrate all things great about the show dog world. Although the Pawscars is an event to celebrate success and acclaim at dog shows, the real purpose is to support seven varying charities in need of support and funding. The Peek A Boo Trust is the registered charity set up to run events such as the Pawscars.

Launched in 2014 The Peek a Boo Trust is to encourage fundraising throughout the world of pedigree dogs and is charged with distributing funds to children’s and canine charities. The seven charities are the Royal Belfast Hospital for Sick Children, PACT Sheffield, Make a Wish, Ty Hafan, Dog Aid, Cinnamon Trust and Search & Rescue Dog Association. Charities like Ty Hafan have just celebrated their 18th anniversary supporting children and young people with life limiting conditions. 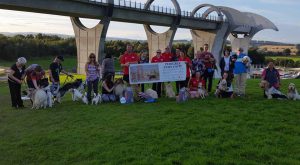 In the last year the Peek A Boo Trust has organised a fun sports evening and their biggest event, the Worlds largest pedigree dog walk. With all Kennel Club registered dogs, over 200, walking seven different locations in the UK over seven days. Over 200 pedigree dogs took part, from Chihuahuas to Irish Wolfhounds and Cocker Spaniels to St Bernards – each walking a minimum of five miles. Four of the organisers walked all 160 miles meeting various breeds along the way helping to raise as much money as possible. Dorwest were proud to support this mammoth task providing water bottles for all the walkers. The enormous walk raised £70,000 alone! A huge achievement that the seven charities received £10,000 each. 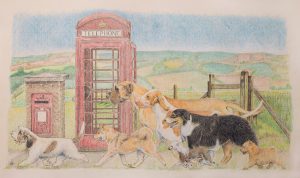 It is hoped that individuals and groups involved in the show dog scene will get behind The Peek A Boo Trust and hold their own fund raising effort, no matter the size of the event every pound counts. This trust was the brainchild of Gavin Robertson of the famous Soletrader Kennels and Stuart Baillie of Dog World and named after the 2013 Crufts Best In Show winner Ch Soletrader Peek a Boo or ‘Jilly’ to her friends!

Gavin said before this years Pawscars, “The PABT in 2016 proved to be our busiest and most successful year to date, our main event was in September with Pedigree Paws Unite (PPU). This involved 212 of the 216 breeds taking part over the 160 miles across 7 destinations in the U.K.  Over 350 people took part and it raised £70,000, a truly monumental effort by the whole of the dog show community in the UK. We have some smaller events planned in 2017 to raise money for the charity and our goal for this year is to bring out some merchandise for the PABT to spread the word even further. The charity is very proud to have raised over £125,000 for dog and children’s charities in the 3 1/2 years since it began.”

If you want to get involved raising money contact Gavin Roberston at: gavinpbgv@gmail.com and contact Gavin if you’d like to donate towards the Peek A Boo Trust and the seven charities it supports.